Consistent with its community service objectives and in the spirit of serving our female students, the Riyadh Colleges of Dentistry and Pharmacy organized “Breast Cancer Awareness Day” last 25 April 2011 at the Namodajia Campus under the supervision of Prof. Farouk Sakr (Pharmacy Department Chairman); Dr. Kamilia Tawfik; Dr. Hana Al Khabbaz; Dr. Lemia Al Khairi; Dr. Sasha Suliman and other faculty from the College of Pharmacy.
A program was held at the Theater Hall featuring Ms. Amal Alkhaibri of the Saudi Cancer Society who explained the dangers of the disease and how to protect females from breast tumor formation. Mrs. Alkhaibri made a demonstration on how to do breast self examination. She also gave some guidelines on what to do in case of any discovery of breast tumors. Free mammography was also offered for those who wanted to have a check up after the program.
Before this, Mrs. Haifa Alquasir, President of the Saudi Cancer Society, gave a talk about the Society , its objectives and the services it provides for the people of Saudi Arabia. 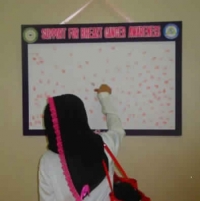 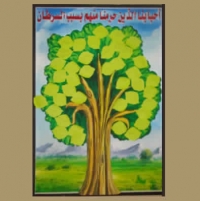 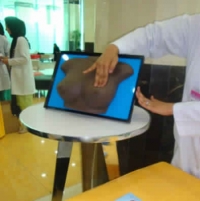 Mrs. Laila, a breast cancer survivor , shared her story and delivered the message that breast cancer is not the end of life but that early detection and regular check-ups are necessary if the disease is to be conquered.
The picture tree whose paper leaves bear the written names of cancer victims.

Several workshops were held outside the Hall after the talks.

One workshop had the attendees imprinting their thumb marks on a board in support of breast cancer awareness. A red thumb mark signified a promise that they would have regular check ups after attending the seminar while a blue one was made by those who did not want to have check-ups because of fear or some other reason.
A second workshop had the attendees writing down on leaf paper cutouts the names of their relatives or friends whose lives had been claimed by cancer. The leaf cut-outs with the names were then put on a tree board to dramatize the importance of having regular checkups even before the disease could develop and debilitate.
Another workshop which had the attendees doing actual breast examination using models developed into a contest with the attendees winning small prizes for their accuracy in detecting the tumors and answering questions regarding the lectures previously given in the Hall. This workshop was supervised by Dr. Sasha Suliman, a member of the faculty of the College of Pharmacy faculty , and some Saudi Cancer Society members.
A demonstration (using a model) on how to do a breast exmination.

Another workshop did the registration of volunteers for the breast cancer awareness program.

The “breast Cancer Awareness Day” also featured a Career Orientation Workshop where representative female pharmacists from three different pharmaceutical companies (Novartis, MSD and Eli-Lilly) talked about their work in sales and promotion of pharmaceutical products especially those designed for females such as contraceptives, vitamins, …etc . They described their work – the difficulties and the benefits ; advantages and disadvantages, as well as the experience that they gain from their field work.
The well-organized event received much praise and gratitude from those who attended and who were asked to evaluate the same.
An article on the event is expected to be published in different Saudi newspapers. A live interview on the “Ladies Hour” on Saudi TV Channel 2 has been set at four in the afternoon on Saturday, April30,2011 with some of the student organizers talking about the event.