Prof. Mahmoud Torabinejad, a very famous American endodontist, prolific author and most sought-after speaker came to visit Riyadh Colleges of Dentistry and Pharmacy on 24 October 2011. He was warmly received by the Rector, Prof. Abdullah Al Shammery with whom he exchanged views together with the Research Center Director, department chairmen in the College of Dentistry and faculty members in Endodontics. After a hearty lunch, Prof. Torabinejad capped his visit with a grand tour of the An Namuthajiyah campus. 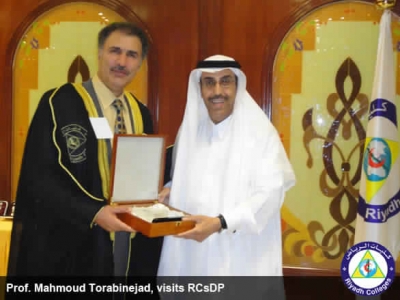 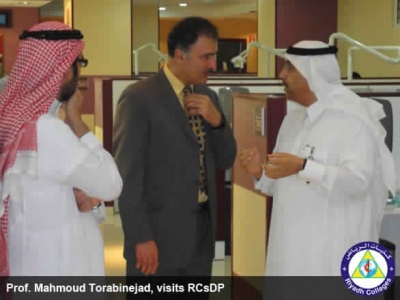 Prof. Torabinejad openly admired the campus facilities during the tour. He told Prof. Al Shammery that in terms of facilities, he would rank RCsDp as one of the more advanced schools of dentistry among the many dental schools around the world that he has visited. He concluded with the statement that he was proud of seeing in a Muslim country like Saudi Arabia a school with such quality as that of RCsDP’s.
Prof. Al Shammery presented Prof. Torabinejad with a plaque as well as a special token of the former’s appreciation for the latter’s visit to RCsDP.
Prof. Torabinejad was born in Kashan, Iran where he completed his elementary and high school education. He obtained his certification in Oral Pathology from the University of Illinois and completed his master’s degree in dentistry at the University of Washington and his PhD degree at the University of London. To date, he has given more than 100 lectures around the world and has authored more than 200 articles on dentistry and endodontics. Prof. Torabinejad is currently the Director in Advance Program in Endodontic at the Loma Linda University in the U.S.A.