At the 55th Quality Assurance Symposium held last May 13, 2016, Dean Saleh Al Shamrani briefly touched on the number of exam questions for the final exams then proceeded to thank everyone, and especially the Core Committee, who had supported and contributed to the self studies made for the Colleges and its programs in dentistry and pharmacy. He announced that the completed studies have been submitted to the National Commission for Academic Accreditation and Assessment (NCAAA) and parallelly to two reviewers in the USA and the UK for the independent opinion. These submissions are in line with the application of Riyadh Colleges for the renewal of accreditation.
Earlier, Prof, Abdullah Al Shammery, in his welcome remarks, informed the gathering that the school has signed the contract with the NCAAA relative to this accreditation renewal and is reportedly the very first institution in the Kingdom to apply for the reaccreditation. This step also involves a hefty amount on the part of the Colleges, he said. 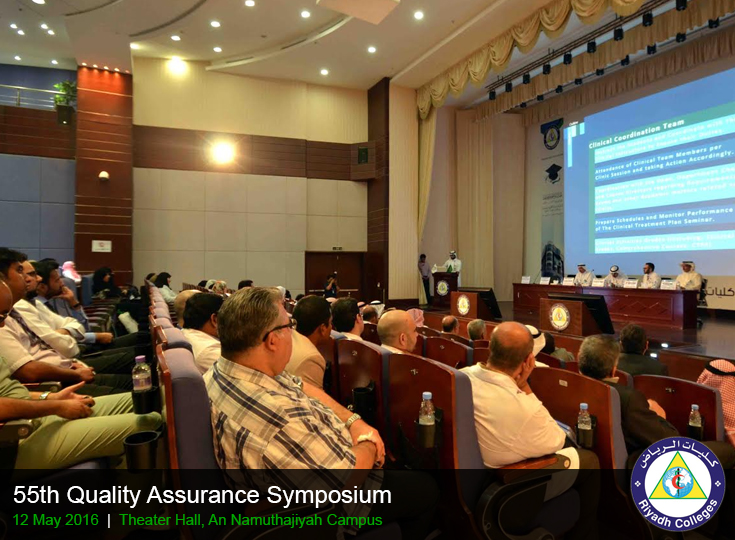 Prof. Hezekiah Mosadomi, Director of the Research Center, reported on the on-line registration of all research projects and online compliance with the Institutional Review Board (IRB) checklist to prevent delays in the approval of the projects which now total 54.
The Research Center Director reiterated the documentary requirements for the different categories of research projects – surveys and studies involving examination of patient; projects involving medical records including radiographs; diagnostic casts and lab reports; and laboratory and clinical studies. He also explained briefly the protocol for clinical studies , the most important part of which is the registration of the clinical trials as part of the Clinical Trials Registry of the National Institutes of Health (NIH) Bethesda, MD, USA.

Prof. Mosadomi informed the assembly that he and Dr. Sharat Pani have now established the role of the RCsDP Research Center in the AEEDC. They both made presentations at the February 2016 AEEDC Meeting in Dubai.
He advised the faculty to avoid an unmanageable number of supervisions of researches while outlining the workshops and/or symposia the Center plans to organize during the next academic year.
He also underlined the updates made by the staff of the Research Center on the strategic plans of the Colleges and the programs towards the self study efforts for NCAAA re-accreditation.
Dr Osama Al Mugeiren, a member of the Comprehensive Clinical Activities Team explained the fivefold- mission of this team which is 1. Accomplishing a Qualitative Academic Knowledge and Clinical Skills; 2. Monitoring the Rules & Regulations According to RCsDP Protocol; 3 Listening to the Students and Providing them with Advice and Support to Improve the Educational Experience; 4. Nesuring a Satisfactory Clinical Supervision; and 5. Providing Patients with a High Quality of Dental Care.
Dr. Mugeiren clearly described the organization in the clinics and outlined the duties of the Clinical Coordination Team; the goals and responsibilities of the Clinical Advisory Committee; the Clinical Violations Committee and the Clinical Audit Committee. He also enumerated the different documents used in the clinics and provided statistics and graphs on the performance of the students in their clinical activities for the first semester of Academic Year 2015-2016. 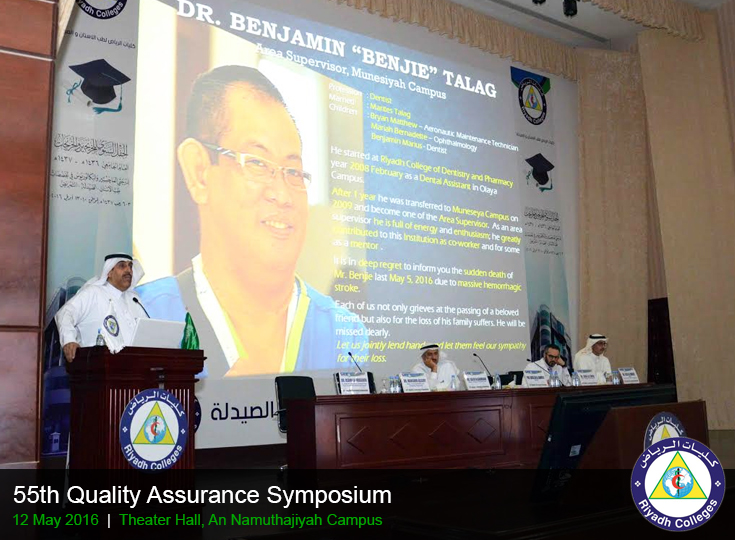 Joining Dr. Osama Al Mugeiren in the Clinical Activities Team are Dr. Faisal Al Rasheed, as the Leader of the Team, and Dr. Omar Al Kadhi, Dr. Deema Al Shammery, Dr. Ahmed Assari and Dr. Baraa Abdulrahman as members.
Both Prof. Abdullah Al Shammery and Dr. Osama Al Mugeiren paid tribute to Dr. Benjamin Talag, one of the Filipino Clinic Area Supervisors in Munesiyah, who passed away last May 6 after loyally serving the Colleges for eight years. Dr. Talag suffered a massive stroke while on duty two days before then went into a coma and eventually succumbed to heart failure.