Prof. Abdullah R. Al Shammery, Rector of the Riyadh Colleges of Dentistry and Pharmacy, was presented with the AEEDC Dubai Personality of the Year for Dentistry Award for 2011 for his outstanding contributions to the oral health profession.
Aside from heading the Riyadh Colleges of Dentistry and Pharmacy, one of the leading dental colleges in Saudi Arabia, Prof. Al Shammery has been a leading member of the International Scientific Advisory Board of the AEEDC Dubai. He played a major role in the organization and establishment of the Arab Academy for Continuing Dental Education in 2009 and still continues to play an important role being the rector of the Riyadh Colleges of Dentistry and Pharmacy which houses the said Academy. He also has spearheaded for the past five years the annual Riyadh International Dental and Pharmacy meetings which have brought together dental and pharmaceutical experts not only from the Arab world but from all over the world. These are only some of Prof. Al Shammery’s important contributions to dentistry.
The special recognition was awarded to Prof. Al Shammery during the Dubai Night of the 15th UAE International Dental Conference & Arab Dental Exhibition – AEEDC Dubai 2011 which had for its theme “Delivering Science & Technology”. His Highness Sheikh Majid Mohammed Bin Rashid Al Maktoum, Chairman of the Dubai Culture and Arts Authority, and Mr. Abdulsalam Al Madani, Executive Chairman of the AEEDC Dubai 2011 presented the award to Prof. Al Shammery. The awarding ceremonies were held at the Meydan Hotel on 2 February 2011. Dubai Night, the evening get-together was also held in commemoration of the “AEEDC Dubai 15 Years of Achievement”. 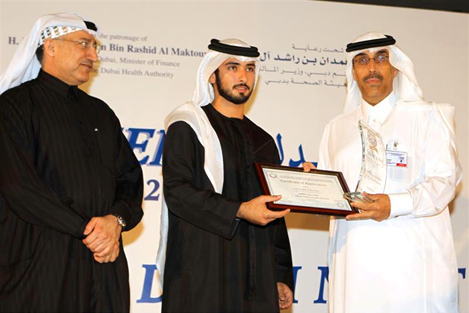