A group of interns from the Riyadh Colleges of Dentistry and Pharmacy participated at the FDI Annual World Dental Congress 2014 which was held from September 11 to 14 this year held at the Convention and Exhibition Center in Greater Noida, NCR New Delhi, India.
The interns received a special invitation from the FDI World Dental Federation to attend the conference opening ceremony in view of the research which they had submitted to the Congress for its consideration. Their research on the phenomenon of dental pain (mouth and jaws) among air navigators resulting from the variation of air pressure was conducted on a sample of pilots and air traffic controllers who work for the Royal Saudi Air Force. The second part of the research was a survey on the extent of knowledge of dental interns in various universities in the Kingdom (King Khalid University, King Saud University, University of Dammam and Riyadh Colleges of dentistry and Pharmacy) on the research topic. 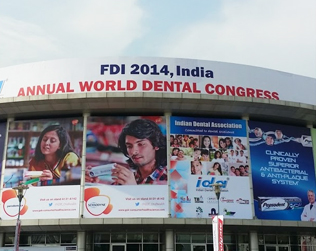 The team of intern researchers from RCsDP included Dr. Ali Al Rafidah, Dr. Ahmed Qathami, Dr. Tariq Ashawi and Dr. Talal Al-Anzi. The group also involved a number of their fellow interns from the other universities to ensure a rich diversity in the sample used for the study.

The research team expressed their gratitude and appreciation to Prof. Abdullah Al-Shammery, Rector of RCsDP, and Dr. Saleh Al-Shamrani, Dean of Dental school and Prof. Hezekiah Mosadomi, Research Center Director, and to the faculty of RCsDP, for their support to the research. 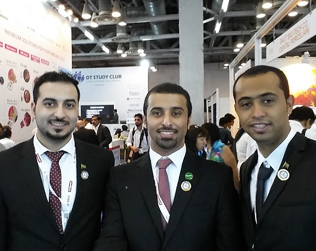 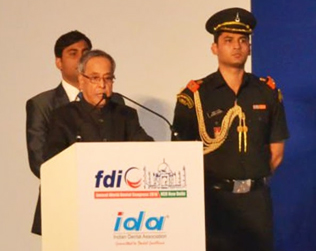 They also thanked the Royal Saudi Air Force for the help extended in facilitating the research efforts and tasks, especially Major General Saleh Al Rafidah, and Brigadier General Mohsen Al-Zahrani, Aviation Commander of Wing 2 at King Fahd Air Base, and Brigadier General Zayed Maloa, Aviation Commander of Wing 5 at King Khalid Air Base.
According to news reports, Mr. Pranab Mukherjee, the President of India; Dr. Tin Chung Wong, President of the FDI; and Dr. Mahesh Verma, President of Indian Dental Association gave speeches during the opening ceremony of the Congress. The Congress adopted the slogan “Billion Smiles, Welcome to the World of Dentistry”, referring to the number of people in India. It addressed nearly 25 themes from several disciplines in dentistry.