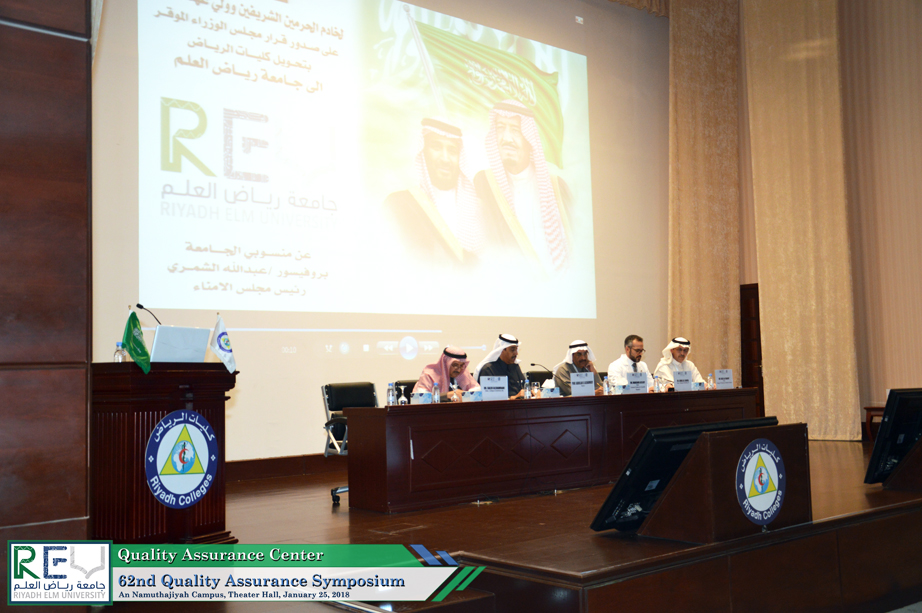 The Riyadh Colleges of Dentistry and Pharmacy (RCsDP) officially announced its title as Riyadh Elm University.
In this symposium, Prof. Abdullah Al Shammery, the Rector thanked and congratulated the deans, the department chairmen, the faculty and all other staffs for their efforts and initiatives done for the fulfillment of being university. He emphasized that it is giving care and respect to the quality of education which made received the product of its excellence. He said that RCsDP is the first college which the government applied its new system.
Moreover, he explained what does its new logo symbols represent. Then, he gave the deans the opportunity to express their valuable thoughts. Each one congratulated the Rector and all the colleagues as well for their contributions and hard works in fulfilling the said achievement.
The respected Rector also requested from other colleagues to speak for themselves about their insights and point of view and there were some who shared and some brought out their feelings of gratitude and appreciation and wished the best for him and to each and everyone. So then he summarized his response into three main objectives of a university which is the education, the research and the community service. And as his token of appreciation and expression of his gladness, he announced to all that there will be a victory celebration which will be held together on the graduation day of the recent batch.
He then asked Dean Saleh to briefly discuss the preparation for the second semester of the present academic year considering system of the previous college to the new status as a university.
In the last part, he encouraged everyone to attend the upcoming AEEDC Dubai as a support and to enjoy as well its benefit and significance.