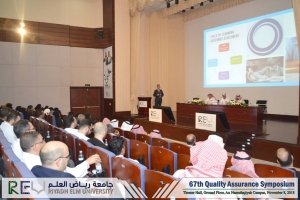 The open remark was done by Dr. Saleh Al Shamrani, Rector, Riyadh Elm University (REU). He warm-welcomed everybody at first and then proceeded to the agenda which focuses mainly on the assessment of the midterm evaluation exam and the learning outcome for Capstones courses which he mentioned to be presented partly by three academic personnel who are Dr. Yasmin Tarek Ahmed, Dr. Manal Al Sayed and Dr. Ammar Abu Mostafa.

He regarded as well the attendance in which he reminded the faculties about the E-Gate system for the entry of student’s absentees for maximum of one week and accepting excuse of the students which should only be once, and the rule in uploading the exam which has to be twenty-four hours before the exam duration and needed to be checked as well for prior thirty minutes.

Board of Trustees Chairman, Prof. Abdullah Al Shammery shared his valuable insights of having quality of system within the institution and the happenings in the first Board of Trustees meeting as a university in which he expressed the happiness he felt from having good attendance of the members and the rules and regulations which have already been finalized after seven months, and the positive feedback from one of them who appreciated and impressed of the organized system of the university as well as the people working.

He also mentioned the suggestion about the new schedule of quality assurance meeting which will be scheduled as twice in every semester instead of monthly meeting. He said it will be scheduled on Saturdays at 1:00 pm to 3:00 pm for everybody to have time in other necessary activities and meetings on Thursdays. But this must be in a guarantee that everybody including the demonstrators will all be in attendance.

After these things, the discussion and raising questions and giving comments were opened for all. Dean Jamal Al Sanea of Postgraduate Studies, Dean Mohammed Al-Rafee of College of Dentistry and Quality Assurance Chairman, Prof. Mohammad Al Omari gave their valuable comments. Follow ups and additional supporting ideas were given as well by some other colleagues.

Prof. Al Shammery then announced other necessary schedules like participation to the huge conference in Riyadh Exhibition Center, conducting again huge conference like the SDESC within the university in the first semester of the next academic year, the different CE workshops, t he graduation ceremony which will be in one day activity and the career professional day.

He gave the honor to Dr. Mansour Assery, the Vice-Rector to close the symposium.