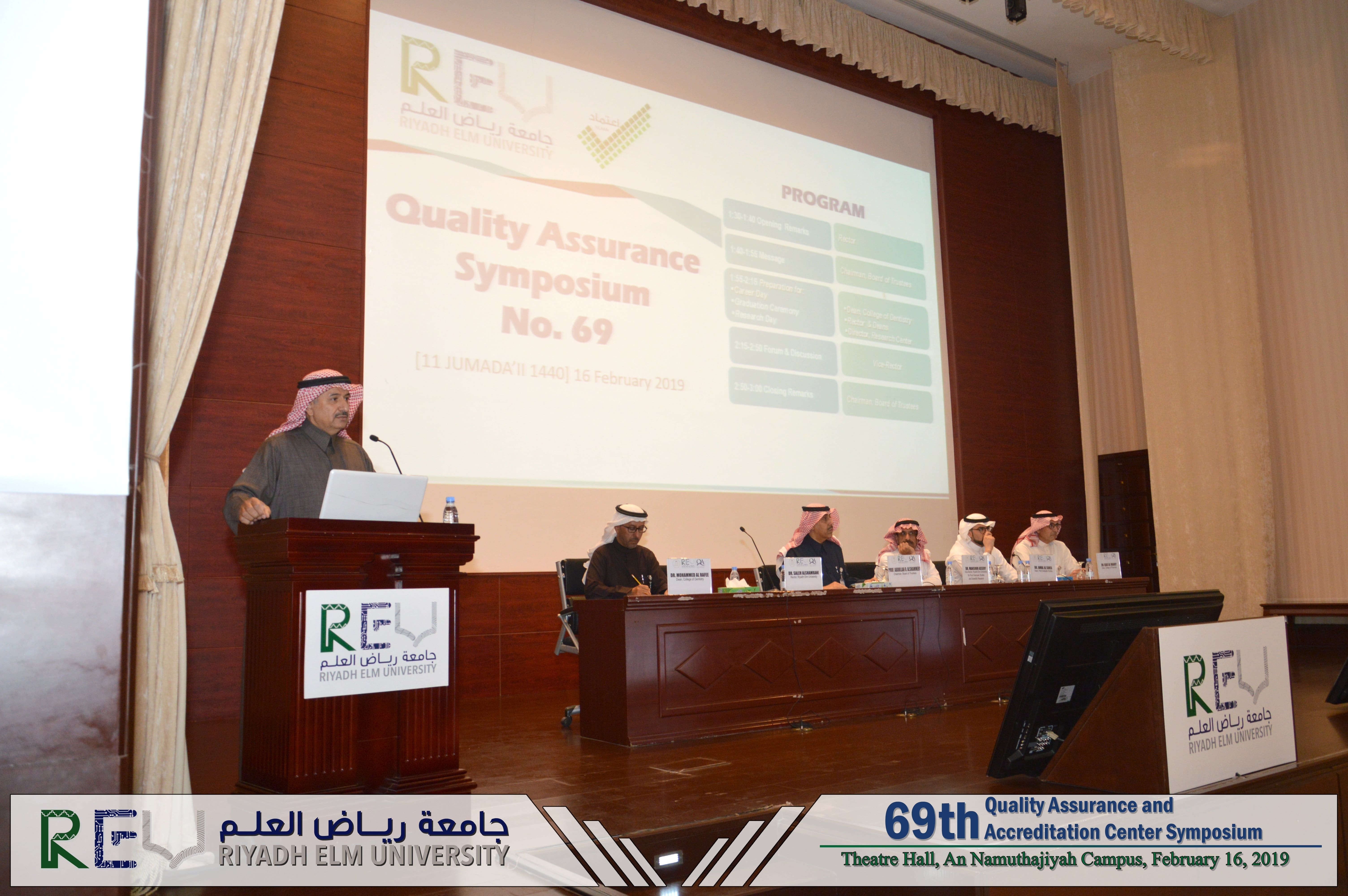 The respected Rector, Dr. Saleh Al Shamrani as the usual, welcomed all the colleagues. He also took the opportunity to congratulate Dr. Osamah Al Mugeiren, one of the faculty members who was promoted as Assistant Professor and he mentioned as well that there will be expected promotion of another five (5) faculties by the end of the semester.

He continued by reminding everybody of the schedules within  two (2) months, prior is on the coming week in which REU is hosting for the 4th Resident Day of Saudi Board Restorative Dentistry, followed by the Graduation Ceremony, and after the Research Day where in everyone is encourage to attend the said activities and other schedules will be announced eventually. Then, he highlighted some important things like the Course Evaluation Survey which he further explained to some faculties and department personnel the need of documentation and must be evaluated in different ways such as by department chairmen, peer observation, accreditation review as per document from NCAAA and any other visiting committees for it is for the benefit of the students and the E-gate system in which he briefly discussed some necessary things to be take care of regarding the registration, monitoring of attendance and assessment of exams. He also took the opportunity to thank the Quality Assurance and Accreditation team for its valuable effort in complying the needed requirements of the NCAAA regarding the transition of college into a university and to remind some other colleagues to coordinate in working for the changes of the facilities especially the logos and any other related things which will reflect to the new system of the university in preparation for the site visit of the NCAAA Consultants on the following week. 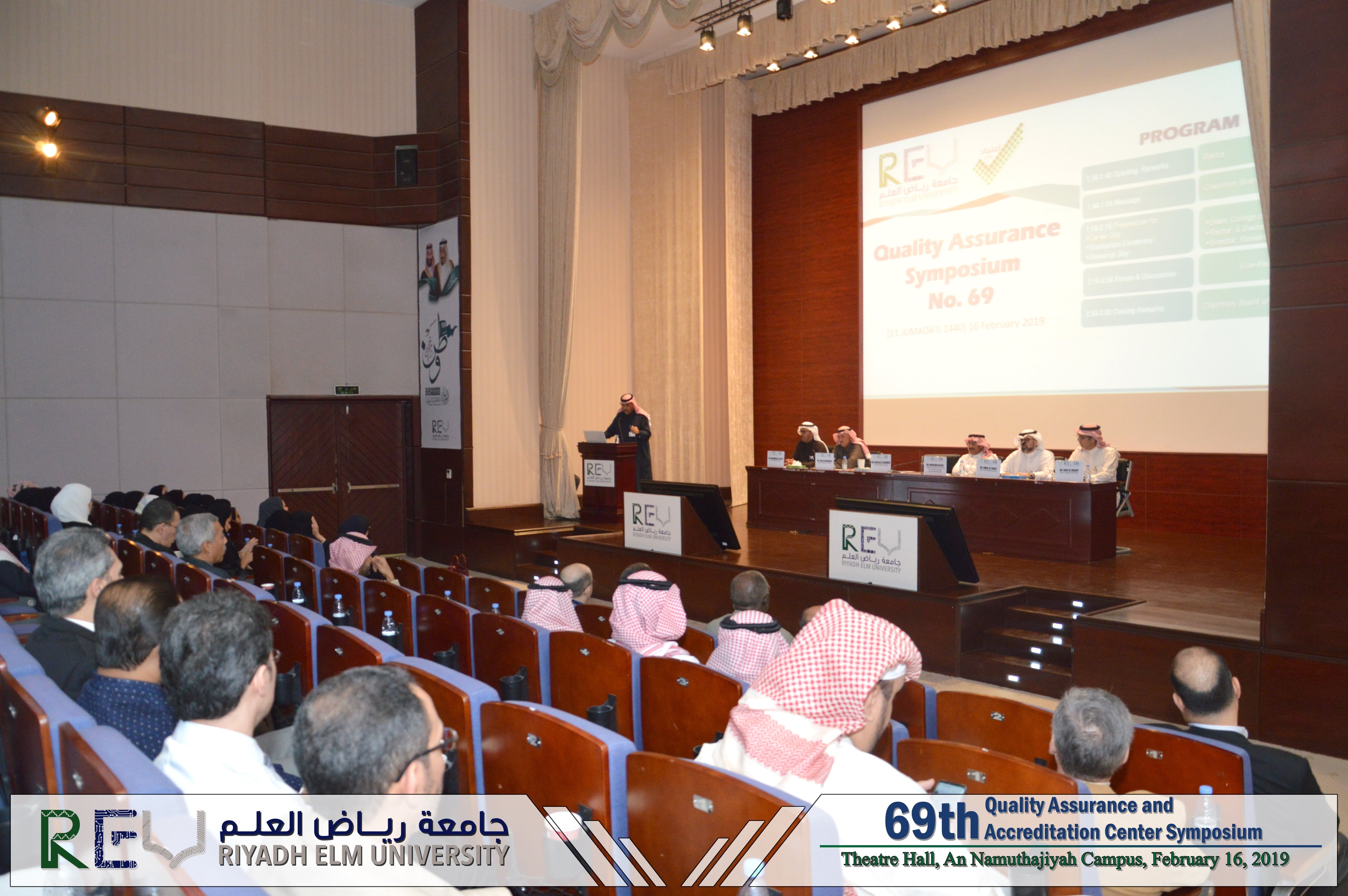 Dr. Sarah Mubaraki, the Director of Admission and Registration for Female Students Affairs shortly gave her assistance to discussed and show on the monitor the E-gate system at E-learning Moodle regarding entering grades of the students’ quizzes and exams in support to what the respected Rector has discussed.

It was followed by the respected Chairman Trustees Board, Prof. Abdullah Al Shammery who shared substantial things. Primarily he said, “Quality” is already a part of everybody’s daily life within the institution and it is continuous just like the design of the new REU logo which has no limit and need to go through it. Secondly, he reminded everyone to be well-prepared in spite of the tension and busy schedule of the present semester to show the beautiful and rewarding upcoming graduation ceremony. Lastly, he mentioned about the new Minister of Education whom he said is an economist, a kind of person who has different view of the private education for he strongly believed that quality should be linked to the society which is the reason why he respected and expected from private universities. In addition, he believes that research has economy value so the respected Chairman encouraged each one to compete with other universities not only to win but also to learn and try his best. After these, he asked to play a meaningful short video intended to the quality assurance team as an stimulation to it.

Then, Dr. Mohammed Al Rafee, Dean of College Board of Dentistry tackled about the 2nd Career Day. He said it’s a whole day activity where in there will be companies, manufacturers and hospitals will be coming to have booths and exhibitions to meet for recruitment not only the graduates of RUE but also from other institutions. He also mentioned two parallel activities will be done at the same time which are the Pharmacy Symposium, Nursing Scientific Activity including workshops which will be participated by distinguished speakers and introducing of Community Partnership as the future activity. In addition, he said there will be alumni reunion in the afternoon to discuss their needs and future.

Dr. Mansour Assery, Vice Rector, REU Postgraduate Studies and Scientific Research, in view of the upcoming Research Day as follow up to Chairman Trustees Board has mentioned earlier, reminded all to submit at least five (5) grants before the deadline. He also took the opportunity to invite them to attend the Saudi Board of Restorative Dentistry (SBRD) to be held the following week. After that, he opened the forum for general discussion.

Valuable comments and information from some faculties were shared. Dr. Jamal Al Sanea, Dean of Postgraduate Studies imparted as well information relating to admission process and application for the postgraduates Then, after Dr. Kais Al Obaidy, Dean of College Board of Pharmacy was given the chance to give update regarding the Pharmacy Symposium to be held on the coming Career Day. Proceedings in other departments were heard from each respected dean. It was followed by short presentation of Prof. Hezekiah Mosadomi about announcement of the essence of the research day. Continuously, some other colleagues shared as well other concerns within their respective units.

Trustees Board Chairman and the Rector ended the symposium by giving valuable conclusion and extending his sincere acknowledgement to everyone.