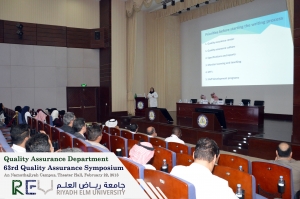 The respected Rector, Prof. Abdullah Al Shammery warmly greeted all the colleagues and started the 63rd Quality Assurance Symposium by emphasizing its objective as a program that directs them to see each one as a social interaction to listen and to see what is going on within their respective duties especially each one is working so hard in different campuses which needs to discuss some of the general issues.

He continued by giving introduction of the list of courses and workshops sent by the National Commission for Academic Accreditation and Assessment (NCAAA) which needs a representative for each workshop’s documentation.

Dr. Tahani Al Rahbeni was the first one to be nominated as representative who documented the workshop which entitled, “Strategic Planning for Quality Assurance Maintenance and Improvement.” With this she discussed its design, implementation, monitoring, feedback and how it will be improved including its two (2) general parts which are the theoretical and hands-on training.

She highlighted that it is for seven (7) years internationally recommended best for measuring the excellence on how it will be reached, how it will be achieved and how to abide in moving to go through.

Prof. Mohammad Al Omari was also given the chance to discuss a brief presentation for new QA updates. He first mentioned the finalization of the previous mission, vision and objectives into new updated one. He followed it by the strategic plan based on the clear guidance discussed by Dr. Tahani.

Then, he tackled as well the general evaluation survey which was sent two (2) weeks ago as a direct instruction from the Rector. He said it is for them to listen to everyone, the academician and non-academician staffs, students and alumni in accordance to their Strengths, Weaknesses, Opportunities and Threats (SWOT) analysis which will be included to their activities.

In addition, he extended on behalf of the QA general committee their appreciation to the QA Staff Professional Development for their support who have already done numerous workshops in which the nominees where from and Dr. Tahani was the first example to represent in the NCAAA workshops documentation and he was hoping that it will reflect and be valued to all the colleagues as teaching and learning approaches to fill the gaps or areas which need to be developed in each oneself. So then, he encouraged everyone to give time to answer the survey in generating the Key Performance Indicator (KPIs) manual to aim the action plan at the end of semester.

After valuable presentation and discussions from the QA personnel, the respected Rector relayed the message from the Ministry of Higher Education in which there is a need to make an analysis from the institution on what is its expectation as a newly designated university and in addition, he mentioned the approval letter of first highness of the government to be with in the graduation ceremony in accordance to his requested schedule.

The colleagues were given the chance to raise questions, suggestions and insights and both Dr. Tahani and Prof Al Omari responded fruitfully, relatively and informatively to each and every one. Dean Jamal Al Sanea and the Rector responded as well in great support.

Lastly, the respected Rector closed the symposium with his sincere gratitude and remarkable words of encouragement.