Under the patronage of His Royal Highness Prince Mohammed bin Salman bin Abdul Aziz, Special Adviser to His Highness Prince of Riyadh, His Excellency the Undersecretary of Riyadh, Dr. Nasser bin Abdulaziz Al Daoud attended this evening the graduation ceremony of the third and fourth batches of Riyadh Colleges for Dentistry and Pharmacy at the head campus. His Excellency was received by General Rector of Riyadh Colleges for Dentistry and Pharmacy, Dr. Abdullah bin Rkib Al Shammari, and the deans of faculties of dentistry and pharmacy, and then played the National Anthem.
Then rhetorical ceremony started by reading verses from Koran, then the graduates march was presented.
A documentary visual film was presented talking about The Riyadh Colleges march, entitled “Leadership and Excellence”, then the graduates speech was delivered on behalf of the student by the Intern Hisham Sayegh who said: “The private education is living educational and developmental renaissance, and a shift in the quantity and quality in all areas, and all of this was not possible without the the help of Almighty God and the support of the rulers, then the leading thoughtful minds, which leads this educational edifice that provides us with different science tributaries.
He pointed out that graduates pledge to be faithful to the religion and king and country, and do everything in their power to make the banner of monotheism flying always. Following that The General Rector of the Riyadh colleges for Dentistry and Pharmacy, Dr. Abdullah bin Rkib Al Shammari gave his speech in which he thanked His Royal Highness Prince Mohammed bin Salman bin Abdul Aziz for sponsoring the concert, felicitated the graduates` parents, and adressed the graduates saying: Your country is proud of you all and hope you will work with all the diligence and dedication to serve the religion,The King, your community and yourselves. Be entrepreneurs, and seek to create job opportunities for you and others. Dr Al-Shammari raised on his and all the the Riyadh Colleges employees` behalf thanks and appreciation to the Custodian of the Two Holy Mosques King Abdullah bin Abdulaziz Al Saud and Crown Prince for supporting the colleges become one of the leading colleges worldwide, also expressed his thanks to His Royal Highness Prince Salman bin Abdulaziz, Governor of Riyadh region for his support for the and his consent to release the name of His Highness the Prince Salman Center for the health of children Riyadh, and His Royal Highness Prince Mohammed bin Salman bin Abdulaziz, Special Advisor to His Highness the Prince of Riyadh Region. 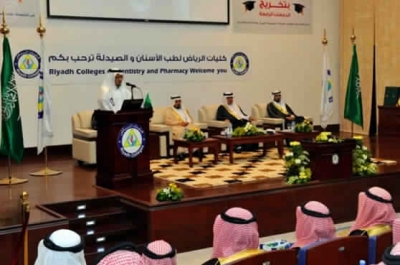 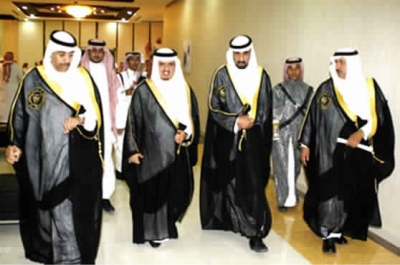 Subsequently the student, Omar Al-Otaibi delivered a poem, then the student Abdulrahman Jassim delivered the graduation poem.
Then His Excellency the Undersecretary of Riyadh, Dr. Nasser bin Abdulaziz Al Daoud honored the top graduates of the third and the fourth batches of Riyadh colleges for Dentistry and Pharmacy.
Then Dr. Dawid received on behalf of His Royal Highness Prince Mohammed bin Salman bin Abdulaziz, Special Advisor to His Highness the Prince of Riyadh Region received a trophy presented by Dr. Abdullah Al-Shammari. Subsequently, memorial photos were shot.
The ceremony was attended by Undersecretary of the Ministry of Higher Education for Educational Affairs in charge of Dr. Mohammed al-Ohali and the deans of faculties of dentistry, pharmacy and a number of officials.